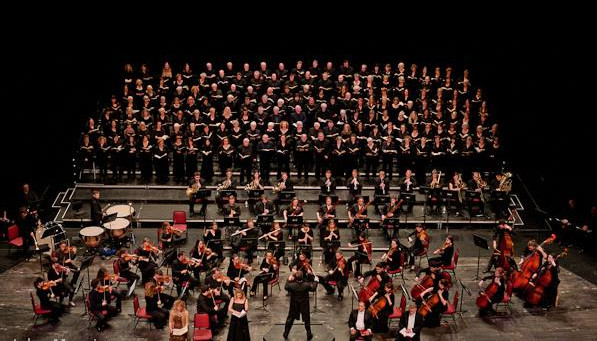 Forty-six years of choral life is quite an odyssey for the Choeur philharmonique du Nouveau Monde!

Singing with the New World Philharmonic Choir is a most stimulating artistic experience, and the choristers prove it, season after season, by offering concerts that are a landmark in Montreal’s cultural calendar!

THE SOCIÉTÉ PHILHARMONIQUE DU NOUVEAU MONDE, A GROUP COMPOSED OF FOUR CHOIRS AND AN ORCHESTRA

Under the direction of a single conductor, Michel Brousseau, the choristers combine their talents to perform the great works of the classical repertoire, accompanied according to the needs of the works by professionals (solo singers and musicians of the orchestra).

CONCERTS IN MONTREAL, OTTAWA AND THE REGION …

The regrouping of these ensembles succeeds – with a lot of passion! – the feat of uniting all these voices as a single breath, while magnifying the sound intensity and the quality of the performance. The presentation of Mozart’s Requiem at Notre-Dame Basilica in Montreal on 15 occasions has even become a real tradition!

But there are so many other wonderful works to sing … There is no shortage of projects and choirs continue to perform twice a year in each of their hometowns, in December and early summer.

… AS WELL AS TOURS ABROAD!

Abroad, the group changes its name to the International Choir, exclusively dedicated to tours outside of Canada. Under this name, the choristers of the four choirs have since 2010 made several tours in Europe and the United States. They were thus able to present great Italian arias, operas such as Cavalleria Rusticana by Mascagni or La Sonnambula by Bellini, as well as the Solemn Mass of Saint Remi and the Mass of Deliverance by Dubois, or the oratorio The Monastery of Arges by Muresianu.

The last tour took place in Austria (Salzburg and Vienna) and the Czech Republic (Prague) in July 2019 where Mozart’s Requiem was presented. The next tours? This remains to be determined. To be continued…