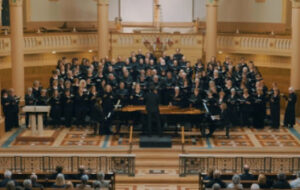 Founded in 1961 by Mr. Jean-Pierre Guindon under the name Les Chanteurs de Sainte-Thérèse, from its earliest years, the choir has given itself the mission of mounting the great choral works of the classical repertoire and showing the public works of art. unpublished.

The choir has accompanied internationally renowned artists such as Gilles Vigneault and Natalie Choquette and has performed with large orchestras: the OSL, the OSM, the I Musici de Montréal chamber orchestra. In 1984, he participated in the High Mass in honor of Pope John Paul II, under the direction of Mr. Guindon.

In September 1999, Maestro Michel Brousseau succeeded Mr. Guindon at the helm of the Chanteurs de Sainte-Thérèse. Maestro Brousseau being also conductor of the Choir and the New World Philharmonic Orchestra, a very interesting collaboration with these organizations has developed over the years. This collaboration extended a little later with the Tremblant Choir and the Ottawa Classical Choir, groups also conducted by Mr. Brousseau.

Since the arrival of Maestro Brousseau, the Chanteurs de Ste-Thérèse have opened their horizons even further. Since 2008, several of its members have performed on national and international stages, joining the International Choir (also directed by Maestro Brousseau) and participating in special concerts, first under the aegis of the Société philharmonique du Nouveau Monde and , since 2017, to Mundia productions projects.

Les Chanteurs de Sainte-Thérèse presented original Canadian creations, including Mass in E minor by Raymond Daveluy (1984), Missa pro Trecentesimo ANNO by Jacques Hétu (1985) and Te Deum by Clermont Pépin (1991). The latter was recorded by Radio-Canada and broadcast several times on its airwaves. The recording was even selected to represent Canada in an international competition. The choir also participated in the presentation of the Cantate pour une joie by Pierre Mercure (1995) under the direction of Jacques Lacombe.

In the spring of 2004, the choir participated in the presentation of Verdi’s opera La Traviata in an original staging by Marie-Josée Forget, and closed the season with Beethoven’s majestic 9th Symphony.

In December 2004, together with the New World Philharmonic Choir, Les Chanteurs presented the complete version of Handel’s Messiah.
May 2005: Te Deum and Messe in D by Antonin Dvorak.
In December 2005, Mozart’s Litaniae Lauretanae and Charpentier’s Midnight Mass were presented, and in spring 2006, Bach’s most beautiful Cantatas, a demanding repertoire whose interpretation has been acclaimed by critics.
Since the turn of the millennium, the choir has presented Mozart’s Requiem annually at Notre-Dame Basilica where, in November 2006, 1,700 people have acclaimed this masterful work.
In spring 2007, Les Chanteurs performed Les Vêpres solennelles d’un Confesseur by W.A. Mozart and Gloria by Vivaldi. As part of a social reintegration project, around ten young people join the Chanteurs de Sainte-Thérèse and live the experience of a professional concert – these choristers have joined the choir to sing the famous Gloria.
The 2007-2008 season was rich in emotions with the interpretation of Puccini’s Messa di Gloria and, in North American premiere, a new work by Théodore Dubois, the Solemn Mass of Saint Remi.
In August 2008, to close this memorable year, several members of the Singers took part in a tour of several concerts in Sicily (Italy) – an unforgettable musical experience!
March 2009: Benefit concert for the patients of the Karnak Shriners with, on the program, Mozart’s Symphony No. 40 and Théodore Dubois’ Mass solennelle de St-Rémi.

May 2009, Requiem by Fauré and in world premiere, the Mass of Deliverance by Théodore Dubois. In September 2009, Dubois’s two unpublished masses were recorded at Saint-Jean-Baptiste Church in Montreal. The worldwide launch of the CD, under the ATMA Classique label, took place on April 27, 2010.
In May 2010, the very famous Carmina Burana by Carl Orff was presented in Montreal, Sainte-Thérèse, Ottawa and Tremblant.
On June 12, 2010, the Chanteurs de Sainte-Thérèse participated in the presentation of the Solemn Mass of Saint Remi at the famous Carnegie Hall in New York.
In August 2010, members of the Singers joined the other three groups

Maestro Brousseau’s choirs for a second tour of Sicily: six performances of the opera Cavalleria Rusticana by Mascagni, concert version.
In December 2010, two performances of Handel’s Messiah, in Montreal and Tremblant.

50 years already! The year 2011 marks the 50th anniversary of the founding of the Chanteurs de Sainte-Thérèse. In March, in St-Jérôme and Montreal, music lovers once again heard Carmina Burana.
On April 30, 2011, under the theme “The Singers of Sainte-Thérèse, a history of choir”, a grandiose concert was presented at the Church of Sainte-Thérèse in Avila. On stage, Mr. Jean-Pierre Guindon, founding conductor of the choir and Mr. Michel Brousseau, current musical director, who respectively conducted Vivaldi’s Gloria and Verdi’s Requiem. A memorable evening! A few weeks later, on May 21, 2011, Verdi’s Requiem was presented again at the National Arts Center in Ottawa.
May 2012. Our listeners have the pleasure of discovering another work by Théodore Dubois: Paradise Lost.
October 2012. As part of the Organ and Colors Festival of Saint-Placide, the choir participates in the presentation of the Grand Messe by Gilles Vigneault and also performs several songs by this great local poet. Honored by the presence of Mr. Vigneault, listeners and singers experienced moments filled with emotion. This concert was repeated in December 2012 in Tremblant as well as on February 10, 2013 in Sainte-Thérèse.
June 2013, Leonardo da Vinci Theater in Saint-Léonard, the most beautiful arias and extracts from Verdi’s opera.
December 2013, in Saint-Eustache, Montreal and Tremblant, “A Viennese Christmas, Strauss’s most beautiful waltzes”.
May 2014: Presentation of the German Requiem by Brahms.
December 2014, in the Church of Saint-Eustache, in Montreal, Ottawa and St-Jovite, Handel’s Messiah thrills souls.
May 2015, Carmina Burana by Carl Orff and the Symphony of Psalms by Igor Stravinsky.
December 2015, Saint-Eustache Church, in partnership with the Laurentian Autism Foundation, we present Gloria by Karl Jenkins and Gloria by Francis Poulenc.
June 2016, Two great works by John Rutter are honored: the Gloria and the Magnificat.
May 2017: Return to Mozart with the Mass in C minor presented in Montreal, Ottawa and Sainte-Thérèse as well as at the opening of the Classica Festival in Varennes.
December 2017: Presentations of Mass in C by Franz Schubert, Gloria by Vivaldi and some classic Christmas arias in Tremblant, Ottawa and Sainte-Thérèse.
May- June 2018: Opening of the Classica Festival in Varennes with the presentation of Puccini’s Messa di Gloria, performed in Sainte-Thérèse and Ottawa.
December 2018: Excerpts from Puccini’s Messa di Gloria and traditional Christmas carols. Presented at St-Jovite Church and St-Sauveur Church.

May 2019: The Little Solemn Mass by Gioacchino Rossini. Presented in Montreal, Ste-Thérèse, St-Jovite and Ottawa.