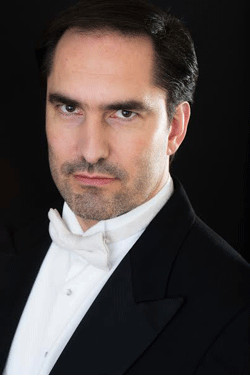 Introduced to music at an early age, his passion and talent were noticed when he began intensive piano studies from an early age. He then completed his studies at the Montreal Conservatory of Music in musical writing, piano and conducting. He studied conducting with Raffi Armenian, Otto Werner-Müller, Milen Nachev, Valery Vachev and Aldo Faldi. In 2005, he was a finalist in the Luigi Mancinelli International Opera Conducting Competition. Also in 2005, the Conseil des arts et des lettres du Québec (CALQ) awarded him the Grand Prix for the creation for his artistic involvement in the Laurentian region.

In September 2010, Michel Brousseau took his place at the piano and participated in the charity concert organized jointly by the Conference of Non Governmental Organizations (NGO) and the Nightingale Initiative for Global Health (NIGH) at Lincoln Center in New York, NY, in order to to support the global campaign to support maternal and child health.

In May 2011, he achieved great success at the National Arts Center in Ottawa, where he conducted from memory, like most of his concerts, Giuseppe Verdi’s Messa da Requiem.

Another passion to his credit is to make discover less known works of the classical repertoire. In 2007, during a stay in France, Michel Brousseau discovered several works by the French composer, Théodore Dubois (1837-1924). In June 2010, Michel Brousseau and the International Choir were invited to present Dubois’ “Mass solennelle de Saint Remi” at Carnegie Hall in New York, with the New England Symphonic Ensemble. This event marked the first presentation of this work on a stage in the United States. This work, as well as the “Messe de la Délivrance” by the same composer, have since been recorded under the ATMA Classique label. Michel Brousseau, with the International Choir, also presented these two works in some of the most beautiful cathedrals in France (Notre-Dame de Paris, the Madeleine, the Cathedral of Reims, the Cathedral of Montpellier and the Cathedral of Metz), during ‘a tour in 2011.

In spring 2012, Michel Brousseau was invited to Italy to conduct the Grand Closing Concert of the Civitanova Classica Festival with the Orchestra Filarmonica Marchigiana in the Marche region.

An opera enthusiast, he has been called upon to conduct operas in Europe, the United States and Canada. In February 2013, he was given the Italian premiere of the opera Pinocchio at the highly regarded Teatro San Carlo in Naples, Italy.

As a pianist, Michel Brousseau has recorded in collaboration with the soprano Maria Knapik, the complete melodies for voice and piano (Op. 74) by Frédéric Chopin. These too little-known musical gems occupy an important place in the history of Polish song. The recording, titled Pieśni, was released in the fall of 2014.

Michel Brousseau is regularly invited to sit as a jury member in international competitions in Italy.

For about fifteen years, around November 1st of each year, Maestro Brousseau conducted Mozart’s Requiem at the Notre-Dame Basilica in Montreal. In 2018 and 2019, the Maison symphonique de Montréal welcomed him to conduct Carl Orff’s Carmina Burana and Beethoven’s 9th Symphony.