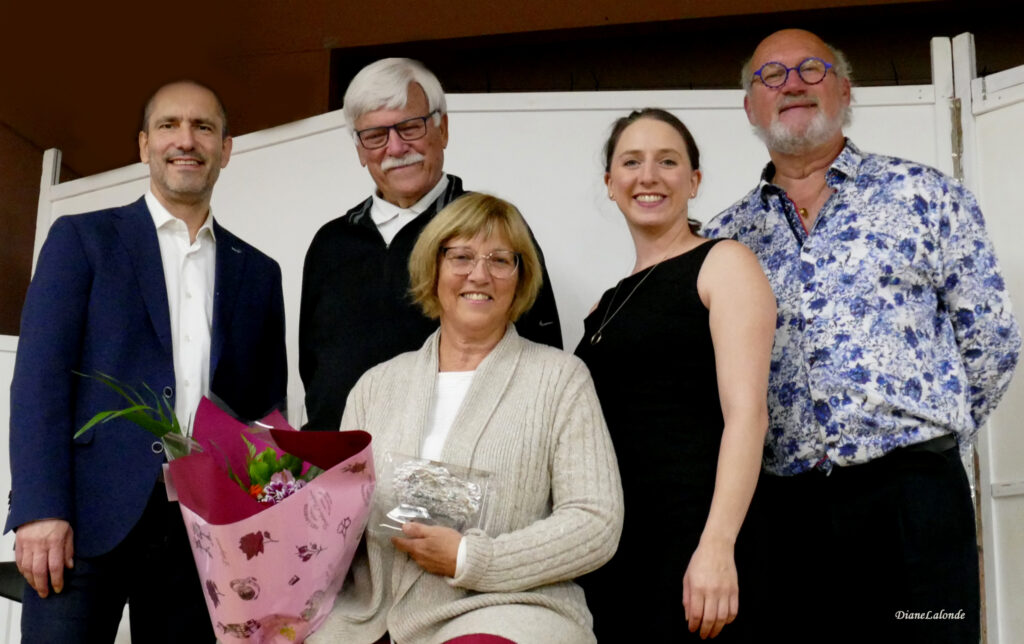 On September 26, 2021, the Alliance chorale du Québec (ACQ) awarded the Gilles-Breton Prize to Mrs. Danielle Maisonneuve as part of a ceremony held during the weekly rehearsal of the Chœur philharmonique du Nouveau Monde – Basses-Laurentides (CPNM -BL), open for the occasion to relatives and friends of the recipient. The Gilles-Breton Prize, inaugurated by the ACQ in 2015 in honor of the teacher and musician of the Quebec City region, is presented annually to a pianist-accompanist or accompanist whose exceptional career deserves to be celebrated and recognized. In the case of Madame Maisonneuve, decades of loyalty and excellence with the CPNM-BL (previously named. Les Chanteurs de Sainte-Thérèse) were highlighted in the presentation of her case. Recruited by Mr. Jean-Pierre Guindon in 1986, he recognized her as a very talented musician. This first chef, present at the ceremony, paid him a fine tribute. Ms. Maisonneuve continued her work as an accompanist, week after week, with Mr. Guindon for 15 years and, for 20 years, with the current conductor and artistic director of the CPNM-BL, Mr. Michel Brousseau, who also wanted to underline the musical bond that has developed between the two of them over the years. It should be noted that Ms. Maisonneuve has also been an accompanist for the Montreal CPNM since 1999, assistant conductor for the two CPNMs, in addition to working on the preparation of the choristers for special concerts and international tours, and directing her own choir. female voice, the Choir Artémis, which she founded in 2009.

Endowed with an exceptional musical sense and a flawless mastery of her instrument, Madame Maisonneuve works in harmony with the conductors, discreet but constantly on the lookout. All the choristers who have had the chance to take advantage of her musical talents agree to recognize in her a pillar of choral work and a sensitive person, open, attentive and willing to help each and everyone to move forward. in mastering his score.

The CPNM-BL is proud and happy of the honor accorded to Ms. Maisonneuve and hopes to be able to benefit from her talents and her great competence for many years to come.